The event was attended by representatives from the United Kingdom, Nigeria, Portugal, The United States, Cameroon, Brazzaville Congo and Equatorial Guinea. The opening remarks and welcome address were delivered by the Head of Oil and Gas, Wofai Samuel.

She said it is important for Oil Producers in Africa to explore new strategies on dealing with the uncertainties in the Petroleum industry. She also said that the OPEC cut in oil production, rise in oil prices amidst the COVID-19 pandemic have contributed to the uncertainty in the industry this year. 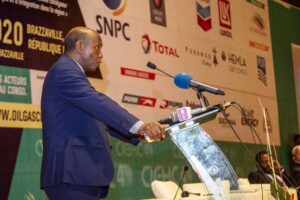 Speaking at the event, the Secretary-General of APPO said Africa cannot continue to depend on the West to fund and provide technology for the oil industry. He said the Organisation will set up a corporation that brings out energy that is efficient enough to fight the big energy problem that Africa currently faces.

On whether Africa is ready to diverse from oil to renewables, he said “Africa is not fully ready to abandon fossil fuel completely because if we do, the continent will be 90% more dependent on imported energy”. He said Africa needs to build energy infrastructure across the continent to cater to its energy needs if energy is to be available at an affordable cost.

Also speaking at the event, the Immediate Past Group Executive Director and Chief Operating Officer of Nigerian National Petroleum Corporation – NNPC & Executive Director Exxonmobil, currently on the board of the Nigeria Liquefied Natural Gas Limited (NLNG) and Non – Executive Director, Fidelity Bank, Engineer Henry Obih said the African priority should be to produce oil for consumption across the continent and not only for export. He said about 90% of oil produced in Africa is taken out to due to insufficient refineries. He noted many countries on the continent can produce more than they currently do with the right finances and technology.

A Contract Specialist in Oil & Gas from the United Kingdom and Current Member of the Board of Liberal Chamber of Commerce, Arvy Nahar, encouraged African investors to focus on the energy sector for local consumption whilst reducing export. She said several IOCs are scaling down their financial commitments in the oil and gas industry and if it continues, funds for research will also reduce.

A co-founder of Na AMA Africa, Ana Albuquerque said if the tables were turned and there was more oil in the West than in Africa, their focus will be on technology that will make oil environmentally friendly. Also, at the event, oil and gas lawyer, Adeyemi Akinsanya said Africa holds a little less than 10% of global oil production with more discoveries still being made but the industry is still highly dependent on external technology and funding.

A Renewable Energy Consultant, Dr Femi Osidele said that if global greenhouse emissions are going to be cut by 20% by 2020 and renewables are going to be increased by 20%, Africa risks making investment and producing oil that will have no buyer because renewables would have substituted hydrocarbons. Career Diplomat and former Nigerian Ambassador to France, Akin Fayomi, also encouraged African countries to trade oil and gas among each other. The Chairman, Foreign Investment Network, Yinka Fayomi said there is no African country that has what it takes to drive the kind of investment and technology needed in the oil sector, hence the importance of APPO in bringing these countries together and building infrastructure that cuts across countries.

Reginald Mba from Harvard University said it is necessary for the Petroleum Industry to partner with the Health Sector. Wofai Samuel ended by saying the quantity of oil produced will not affect the oil price. The most important thing is for the right technology to be in place to transport energy from where it was produced to where it is needed.

The virtual meeting will be continuous with the next edition to focus on Local Content in Africa’s Petroleum Industry, Wofai Samuel concluded.

The African Petroleum Producers' Organization (APPO) has signed a Memorandum of Understanding (MOU) with the African Export–Import Bank (Afreximbank) for ...
23rd February 2022

Professor Yemi Osinbajo, the vice president of the Federal Republic of Nigeria, offered his thoughts on the western world's planned ...