The residents of Mount Kenya and the Northern regions will be beneficiaries of a cheaper and safer fuel after the renovation of the Nairobi-Nanyuki railway line by the Kenya Pipeline Company (KPC).

The refurbished railway line will be used for the transportation of fuel by rail which is cheaper and safer compared to the transportation of fuel by road. The project was renovated within a few months after Sh1.8 billion was committed to the cause by the KPC. The money is part of the Pipeline Company’s remittances in the form of special dividends.

During a tour of the facility and its environment, Petroleum Principal Secretary, Andrew Kamau  said, “As Government, we are very excited that with funds that came from KPC, Kenya Railways has been able to execute this project within a few months and we look forward to its commissioning very soon.”

“I am happy that we already have an anchor client for this rehabilitated line-Vivo Energy Kenya who are ready to utilize the line by ferrying fuel from Nairobi to Nanyuki for easy access to consumers in several counties in this region.”

Solomon Kitungu, Transport Petroleum Secretary also commented that the resuming operations of the railway line which has been neglected for years will not only bring cheaper fuel to the people but will open up several economic opportunities in the region and is a remarkable one for the govermen’t achievements.

He said, “I congratulate Kenya Railways for the speedy completion of this project because the economic benefits of this refurbished line especially in agriculture will go beyond the Mount Kenya region to other neighbouring counties. There will also be less accidents on our roads hence saving on lives.”

Governor Ndiritu Muriithi of Laikipia County said the railway will ease the import and export of good to and fro the region. In his words, “This line will not only enable us import critical products such as fuel and farm inputs, but it will also improve our capacity to export our homegrown agricultural products to intended markets on time and in an efficient way.” 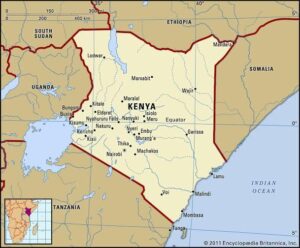 According to The EastAfrican, the second round of bids for Uganda's oil licensing round that expired at the end of ...
7th October 2020

The National Water Harvesting and Storage Authority (NWHSA) has re-launched the tender for the construction of the Koru-Soin multi-purpose dam ...