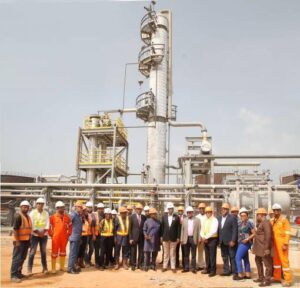 The Refinery was virtually commissioned by the President of Nigeria, Muhammadu Buhari. In attendance was the Minister of State for Petroleum Resources, Timipre Sylva, the governor of Imo state, Senator Hope Uzodinma, the Chairman of Waltersmith Group, Abdulrazaq Isa, traditional rulers, Heads of the Nigerian National Petroleum Corporation and the Nigerian Content Development Board – Mele Kyari and Engr. Simi Wabote, respectively; CEOs of Nigerian-owned oil major and Independent Exploration & Production companies and oil service companies.

The President also oversaw the ground-breaking of the 45,000 BPD expansion of the refinery. The company will build the second phase in two parts. One is a 25,000 BPD standalone condensate refinery which is to be completed by 2023. The second part is a 20,000 BPD crude processing plant.

The President said, “There is increased momentum in the other three focus areas under the roadmap covering the rehabilitation of existing refineries, co-location of new refineries, and construction of greenfield refineries,” he said.

”The realization of the refinery roadmap will ultimately lead us to becoming a net exporter of petroleum products not only to our neighbouring countries but to the worldwide market. This modular refinery is the largest commissioned modular refinery in the country today.”

Although sixteen (16) proposed refineries have been granted an “Authority to Construct,” only the 650,000 barrels per day Dangote refinery which is over 70% complete and the 6,000 BOPD Edo Refinery, which is also almost completed, are currently under construction.

Nigeria Will Meet its OPEC+ Quota by August – Timipre Sylva

Nigeria's Minister of State for Petroleum Resources, Chief Timipre Sylva, stated last week that his country would be able to ...
10th April 2022

In a recent letter to MPs, Nigeria's President Muhammadu Buhari stated that the rising cost of crude oil will boost ...
7th April 2022