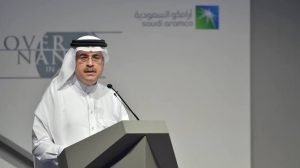 During the ceremony, the Prince highlighted that Saudi Arabia’s goal is to apply the Carbon Circular Economy model to achieve net zero emissions by 2060. SGI’s delivery roadmap was revealed at the Forum, as well as the Kingdom’s ecological efforts. The summit was attended by world leaders from all walks of life, and it is intended to inspire action and spark new ideas to address climate change.

Mr Naseer said this is based on the Kingdom’s critical role in confronting shared international issues, its belief in the need for collaborative efforts to confront climate change and the necessity of the green transformation to deliver social and economic prosperity to the Kingdom.

He said: “We are excited about the historic announcement by His Royal Highness the Crown Prince about the Kingdom aiming to achieve net zero by 2060.”

“This is historical announcement, and it means a lot to all of us. It will create the right platforms for Saudi Aramco and other entities within the Kingdom.”

“We need to consider that this announcement comes from the biggest hydrocarbon producer in the world.”

“To make that type of commitment is something great, and I’m sure others will follow the leadership of the Kingdom.”

“For Saudi Aramco we also have announcement. We are excited to announce that Saudi Aramco will aim to achieve the ambition of being net zero from our operations by 2050.”

“We understand the road will be complex and this transition will have challenges, but we’re confident we can meet them and accelerate our efforts to a low-emission future.”

In a statement to the Tadawul Stock Exchange, where the Company shares trade, the world's largest oil-exporting company, Saudi Aramco, ...
14th October 2020

The Indian Petroleum Ministry said that it is not changing the initially agreed size and scope of the soon-to-be-constructed refining ...