After my doctorate degree programme in America, I was fortunate to get a job with a reputable petroleum company in Nigeria. I returned home feeling quite accomplished; I had a house waiting for me in an exclusive part of the capital, with vehicles to give prestige to my status. As young people say now, ‘I had arrived.’

I had barely settled into the job when my father called me home for a meeting. I was reluctant to heed the call because I was pretty sure it was another attempt at matchmaking, but I was wrong. He told me quite earnestly that I needed a mentor; I was gobsmacked. A mentor, I asked myself. The somewhat infelicitous advice, as I saw it at the time, had brought me all the way from Lagos to Benin by road. What did I need a mentor for? I had gotten a reputable job by merit; I had set a record in Harvard for speedy completion of my doctorate programme all without a mentor. I didn’t see the need for one after I had finally “written my name in the stars.” My father insisted though, and years later, it is one of the many things that I am grateful to him for.

Mentors are people who have successfully manoeuvred the journey you wish to embark on. They are seasoned, possessing reproducible track records of great results obtained through consistent application of wisdom and hard work.  Choosing a mentor is a careful process that could take a while. In my case, I had the support of my father. We pored through records of men and women who had made names for themselves doing the kind of work that I envisioned myself doing and then we streamlined the list; striking off some names as we ticked boxes that we felt would better qualify a great mentor.

I’ve been lucky; most of the people who greatly impacted my career and life were people that I got introduced to through my mentors.

In a short chat, a mentor can impact wisdom and insight that one month of dedicated encyclopaedic search might not reveal. I recently saw a meme that rightly said “Google doesn’t know everything; you need your elders too.” This is true of mentors; they can compress time, they help you to jump over hurdles quickly and they help you to stay focused because they had probably passed through the same distractions that beset you.

Having enjoyed a fulfilling relationship with my mentors, I was quite eager to mentor other people. It is a fact that in the companies I founded, I like to give positions of responsibility to relatively fresh hands that are ready to learn; I have mostly been gratified by the results. Seeing these young people becoming very successful in their own businesses is highly rewarding. However, I have had some not so great experiences. Take Raymond for instance, the son of a respectable older man who was like an ‘uncle.’ I eagerly took Raymond under my wings shortly after I began to reap the results of having mentors myself. I was keen to impact another person, and Raymond was my tunnel vision. I gave him books, took him with me to meetings and conferences and generally made sure I spoke to him about available opportunities in our field. A year later, Raymond had no record of any professional progress instead he took negative advantage of the contacts I had availed him with.

In conversations with friends and colleagues over the years, I have found that the common mistake younger professionals make is that they do not understand what a mentor/mentee relationship is all about. A mentor is a guide; he is not your problem solver or financier. You seek the advice of your mentor when you are taking off in a certain direction in your business. Your mentor may point out things that you should watch out for. Don’t keep away for three years and suddenly start burning down his phone because EFCC is on your trail or your business is on the verge of collapse.

A mentor is a disparate from your referee, although one can play both roles. You leverage on the experience and vast knowledge of your mentor, you don’t dump all your problems on him. Have a realistic expectation; he still has his own life. Some mentor/mentee relationships collapsed because the mentee would call the mentor every day, sometimes at very odd hours. That is very wrong. The best plan is to ask your mentor how he would prefer to be reached and to follow it strictly.

Be specific about what you need and take time to review your progress. Be honest, don’t pile up figures because you want to impress your mentor, he is not your fan; he is there to help you, so be sincere.

Finally, show appreciation. God has everything but he still asks us to give. In words of acknowledgement and gifts, show your gratitude to your mentor.

Where the relationship is not fruitful, maybe the mentor has no time for you; pull back respectfully. It is not a contractual agreement neither is it a sworn oath so there’s no need to start badmouthing the mentor or bombarding him with mediators. Look elsewhere.

By the way, I am not taking any new mentees … at the moment … just in case you are wondering (LOL).

Stay focused and be good!

A Dad and More

It has been a while since I had reason to write my famous Fatherhood column. For those of you old enough to be familiar with the column, it ran in the very successful HINTS magazine for over 20 years and I finally berthed it. I have run into many fans of the column over the years who would query why I stopped the highly entertaining column and would urge me to restart but I resisted.

First, Hints was no more and second, my life had taken many changes career-wise. I had gone from corporate leadership in the oil sector to being privileged to serve as Nigeria’s Minister of State, Petroleum (2015 to 2019). Along the way, I served as President of three foremost global energy bodies including OPEC . They were very challenging positions that left me little time to keep a regular column. In addition to these, the major principal characters of the column had grown to adulthood and were not too enthused living their lives in the media. My other younger children grew too fast and much more in my absence for me to capture their growing up tales.

Anyway since the last few years, Nkem, my daughter has gotten married and has had two kids! Granddad! Yes, believe it or not. Emeka has grown and is now getting ready for his marriage set for early June, this year. Uche is in toe, with a serious relationship in hand and I see the bells ringing soon. My other kids, Nayo 17 and the twins Nedum and Eloka 14 are rushing up the ladder of life. Sometimes, I want to ask them to slow down and freeze the haste in their growth so I can enjoy the moment . But they are in a hurry and I am scared of the speed of ageing. Interesting contrasts, but that is what this life serves us.

In all of these, there are tons of exciting moments to go with it.

Like a few minutes ago, my six years old granddaughter walked into my room as I sat writing this and decided to feature.

“What are you writing?” She asked, her right hand over my shoulders, her eyes squinting to read what I was writing.

“What is a column?” She asked, giving me her full attention.

“Something you write often,” I replied.

“But I write my homework every day.” She pointed out.

“Yes, you do but that is not a column.” I replied absently.

‘So, a column is not what you write often, Grand Pa. You see you failed it.”

I took a deep breath. Not now, I said to myself.  I couldn’t afford to get into a long debate with Nere not when I finally got myself to write my first article for the FATHERHOOD column.

“Yes! You are right.” I replied, conceding quickly.

“You see, Grandpa.  You are wrong.” She said, looking triumphant.  “What do you do when you say something that is wrong, Grandpa?” She asked. I smiled inwardly. It was a lesson that I had taught her mother. I was glad that the tradition had been passed on.

“I admit that I am wrong.” I replied solemnly, pausing my typing. I saw her nodding her head sagely. “I made an error in my definition.” I concluded quickly.

“That’s okay Grandpa. “ She responded graciously. “So what is a column?”

“Ehh!!” I wanted to tell her something simple that would not prolong the debate but just then, Emeka walked in, a wad of sheets in hand. Saved by the bell, I said to myself, looking at Emeka gratefully.

‘Nere, run along now, I need to talk with Dad,’ he told his niece and settled in the chair opposite me. Nere’s long face as she departed showed her objection to being chased out.

Emeka put his documents on the table and I could tell from the numbers I saw on the top page of the wad of sheets that he had come to discuss his marriage event and some gruelling financial matters. I let out a groan inwardly and wished Nere had stayed on and continued her grilling.

TOP PICK FOR THE WEEK 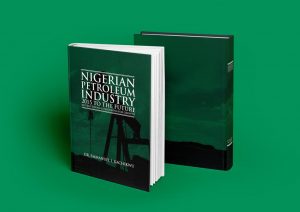 Last year, 2021, I published several books including NIGERIAN PETROLEUM INDUSTRY 2015 TO THE FUTURE: Restructuring and Reforming for Growth. The book basically catalogues the challenges I met in the petroleum industry as Minister of State for Petroleum (2015) and the policies and actions we took to address the challenges. It also gives some clear roadmaps into the future of that industry. I will recommend it to everyone but especially to players in the Energy industry, youths whose voices need to be heard in the country, Union/Opinion leaders and all politicians. Being adequately knowledgeable about Nigeria’s key source of revenue and the workings of that industry will help the aforementioned groups to make valid demands/observations/ and draw suitable conclusions.

Fatherhood with Ibe DOWN MEMORY LANE Now, all thanks to God’s mercy, my son Emeka has married his sweetheart in ...
7th March 2021

AFRICA IS OPEN FOR BUSINESS

Over the years, African oil-producing countries have been deprived of adequate investments to the largely unexplored reserves lying on the ...
28th February 2021

Whither Oil Producing Nations And Their Future

As the price of most crude types began lifting measurably in the last two months, rising to over $60 per ...